Who makes a double cutaway solid body that looks like this:

Back in the 70s, Ace Frehley had his damaged Tobacco Sunburst repaired and it came out like the shape I'm looking for:

Here is a video. Forward to the 36 minute mark to learn more about this rare guitar that found its way to players such as Gary Richrath, Howard Leese, and Joe Walsh.


More recently, Heritage was doing something similar with their now discontinued H-170.

I know Hamer and Gibson made double cutaway carved-top guitars but these tended to utilize the Les Paul Junior shape and not a Standard Les Paul shape. Picky, I know. I just love the way these guitars look, particularly the Worthington (as seen in the live "Riding the Storm Out" we all watched on MTV ages ago).

Anyone know of anything out there that looks like these?
Last edited: Nov 11, 2019

There is a guy in the UK named James Collins, who makes exquisite looking solid and semi hollow versions of that body shape. If you are on a budget, perhaps a used Hamer Studio?
J Not quite there but probably between the Ibanez above, as close as I'm going to get without commissioning a custom job.

I'd think there's be more builders.

Looks like my Vega SG-99
But Vega went out of business decades ago. 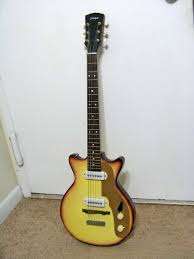 Gretsch. Both proline and electromatic.

Those are sweet! And surprisingly not that expensive. That's what I was looking for.

Benz2112 said:
There is a guy in the UK named James Collins, who makes exquisite looking solid and semi hollow versions of that body shape.
Click to expand...

Those are beautiful as well.

Epiphone Genesis, I think they reissued this a couple years ago:

The Ibanez Artist series was rereleased a few years back. I have one in cherryburst.

You can't go wrong with an Ibanez Artist, a Hamer or a Yamaha SG in my opinion. As long as the look is close enough for you they're worth a look. Older Ibanez guitars, Hamers and Yamahas have been going up in price over the years but they still turn up at reasonable prices on my local (Vancouver) CL fairly regularly.

Gibson does have a double cut Les Paul:

I'm not sure what you mean when you say "Gibson isn't doing this" though. Do you mean the smaller 'horns'?

My local shop has on in Bourbon Burst. Its tempted me many times.

Drew68 said:
Those are sweet! And surprisingly not that expensive. That's what I was looking for.

They're very good value for a British made guitar, and they are genuinely made from scratch in that workshop as well. And our currency's worth buttons these days so it's a double win if you're across the Atlantic! 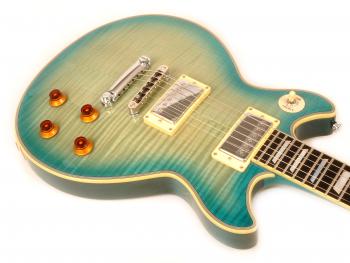