Who's Guitar is the Holy Grail?

I knew it was supposed to have great tone, but i didn't know SRV's number 1 was delicious.

Any of the off the shelf big headstock CBS Strats Jimi played!

In general, culturally, I would say Robert Johnson's Gibson.


Strictly for my own fanboy enthusiasm, though, I'd go with this one, mainly due to the many hours spent gazing at the LP cover to Rock 'n' Roll Music when I was a kid:

Damn, No EVH, and only one chuck berry, and no Elvis Aloha from Hawaii pose...

I'm sure it's been said - Pearly Gates!
J

Skip the guitar. Give me Mike Campbell's hands.

What, you say I can't have them?

Well give me any of them in this pic! 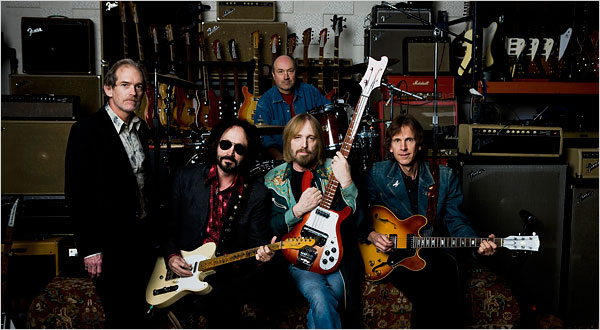 Most any guitar on this page would be fine by me.
http://www.geocities.com/SunsetStrip/Studio/1857/guitars.html

Call me a fuddy-duddy if you want to, but if I could own any guitar in the world, even if just long enough to strum a few chords on it, it would be Maybelle Carter's late 1920's Gibson L5.

I'd tune it to my open chord tuning, capo it up, and fingerpick 'Wildwood Flower' on it in accompaniment to the original recording...twilight zone stuff!
Last edited: Dec 28, 2008

Runners up:
Eric Johnson's "Faye", the one he got back recently after being stolen
26 years ago the black one with the "special violin tone".

David Gilmour's Red strat with the EMGs (or I'll take the black one too!).

Too bad it was destroyed sometime in 1975 due to a bad accident.

Too bad it was stolen almost immediately from the guitarist who had
the guitar commissioned and built by Dullam. Rumors are it's in europe
somewhere.

Ibanez made an "Artwood Twin" based on the Bogue design and
reissued it a few years ago.

Cool thread! Any of the big teles would do it for me- Keef, Roy, Bruce, MC & TP, Joe Strummer, Clarence, Gatton, Muddy, Buck & Don, etc. But just for personal reasons, my Holy Grail would be Peter Buck's Ric.
J

.......although Duane's LP would probably be somewhere near the top of several people's list.....

i know it's at the top of mine
K

For me it would be the 59 335 Robben Ford used with the Yellow Jackets. The live Monmouth College Fight song tone kills me. And to think he was using a solid state Yamaha amp.

I'd like to play any of Neil Young's Martins...especially this one:

Dickey Betts' goldtop tops off my list of electrics.

I'd have to say this one. Slash's replica.

I'm surprised nobody has mentioned this