I’m getting close to finishing up an AB763 blackface DIY build and have been trying to decide the final speaker configuration for it. I love the early breakup characteristics of the 10”, and the richness of the 12”. Then I got to thinking... why not a cabinet that has one of each? That way I could mic up either (or both) depending on the tone I'm after. I’ll get some weight reduction too compared to a 2x12 configuration. Unless I’m missing something it seems like kind of a no-brainer right now.

Definitely not common, but they're out there. I recently started a similar thread in which I was introduced to PineTone cabs. I plan on eventually getting one of his 10/12 cabs. Here's that thread.

What I can say regarding this is that I used to own a Fender Two Tone amp several years ago. It was a Fender Custom Shop creation and it was basically a Blues Jr in a larger cab with a 10 and a 12 in it. Besides the 10 and 12 and the bigger cab it was exactly a Blues Jr, only it didn’t sound like a Blues Jr. I also owned a Blues Jr at the time which had the billM mods and a Cannibus Rex 12 in it and the Two Tone completely blew away the Jr. Not close, not in the same universe. It was a super great Blues amp. I mean as soon as you plugged in you just knew it was awesome. Perfect blues tone. Tons of mojo. Of course I traded it to someone for another amp. Dumb as dirt move but oh well. So my experience is that a 10 and 12 might just be a killer combo.

Cab manufacturers aren't exactly known for thinking outside the box (pun intended). I mean how many more ways can you pack a 12" V30 into a cab?

I think 10" speakers should be found in more cabs than just the lowest tier tiny practice combos. 2x10s and 4x10s are great for guitar. Less size and weight, no boomy bass you need to severely cut at the amp.
B

Why not just have a 1x10 and a 1x12 cab? What does having them in the same cab buy you? It seems like it could be a problem having them together.

I just did that with a Marshall Lead 12 I just redid, G10-35 in the top cab and a Greenback in the bottom. Sounds great! 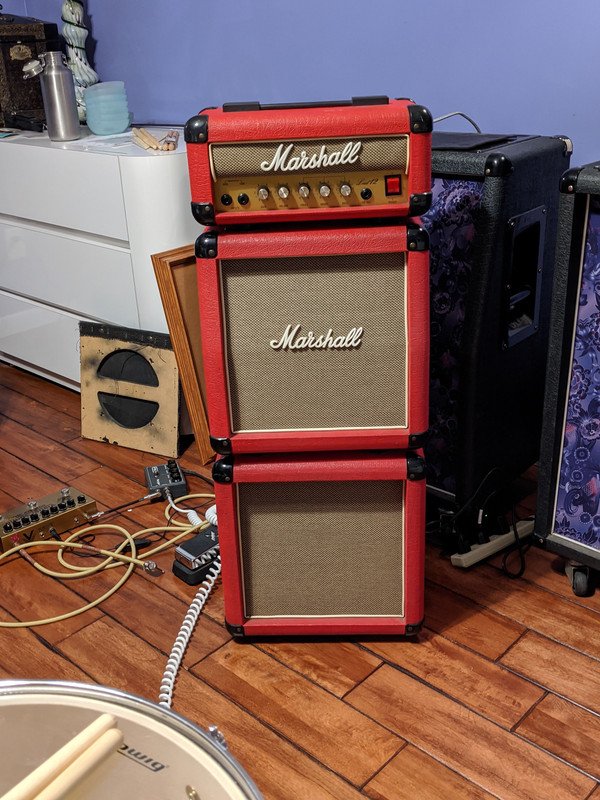 It makes sense. the ten can add tightness and mids, I suppose, and the twelve adds size.

I don't play many rock gigs these days, mostly acoustic or bass, and do not currently own a guitar amp. For the occasional electric guitar gig, I use my 1-10 bass extension speaker driven by a Crate Powerblock and a Zoom G1Xon. Works fine although there are about ten possible infractions of TGP orthodoxy therein.
D

If you have separate 1x10 and 1x12 cabs you can use them for different purposes, e.g. one cab directed at the audience (or other band members) and one pointing at your ears.

Buck Woodson said:
Why not just have a 1x10 and a 1x12 cab? What does having them in the same cab buy you? It seems like it could be a problem having them together.
Click to expand...

I would think that you would need to do that in order to wire them to the correct impedance. My amp build does have two output jacks though, so it might be ok but I'd need to double check.

I've been experimenting with mixing separate 1x12 and 1x10 cabs. I found that I don't like using two separate cabs. I prefer a single cab.

I feel like the two cab setup would be better suited to using two identical speakers.

In the mid-late 90's the original VHT company sold a 2X12+1X10 cab, they unofficially called it their Mickey Mouse cab for the obvious speaker placement inside the cab (the 10' was below-center low w/2X12's just wide enough apart on top). They may be really hard to find as I don't think they made too many of them. They also payed close attention to the sensitivity of the 3 speakers so the 12's didn't dominate all together. The 10 in the cab helped keep the low end punch tight, as 10's tend to do. Way back when I had the chance to audition one at a store that was a VHT dealer, almost pulled the trigger (was considering it for my Pitbull 45 head); great authoritative sound, bit-of-a-load to move around though.

Twelve ten inch speakers would be a huge cabinet

The concept of using a 10 and 12 together sounds like a good idea and I'm sure it actually sounds good but in a band setting the guitar needs a narrow bandwidth not a larger one. IMO, 10's are great for cutting through a mix but the 12's low end lose the battle when competing with a bass guitar and also make for a muddier mix.

My DIY build is in a Super Reverb chassis, which is the same size as a Vibroverb chassis. The Vibroverb cabinet is a 1x15 speaker configuration.

I contacted Mojotone and they said that they will be able to do a custom 12/10 cutout on one of their Vibroverb cabinets for me, and it looks like there's no extra charge.

So this will end up being somewhere between a Pro Reverb and a Vibrolux... a "Vibrolux Pro Reverb"?
Last edited: Feb 12, 2020

With my last homebrew amp, I liked the 12/10 combination. It sort of reminds me of the sound of a 4x10 cab and I used neo speakers to keep the weight down. Here's a photo: