What is AIRSTEP?
AIRSTEP is a universal foot controller that offers unprecedented flexibility and control of your music related devices and effects app ecosystem.

AIRSTEP can be used as ”a computer keyboard placed on the ground”, it can control the page turning of tabs or music scores on the computer, tablet or mobile phone. When you watch video guitar lessons on a website, it can also control the pause, playback speed, and the transport controls of the video. Free your hands completely!

AIRSTEP has 5 footswitches, and can wirelessly expand 5 more footswitches. Each step on the footswitch can send up to 8 different control messages at one time. All control messages can be easily edited through the free AIRSTEP APP. Programming and editing isn’t your thing? Just load any of the massive library of built-in app presets with just one click. You can find the controller presets of your favorite gear right inside the APP, truly plug and play!

AIRSTEP is powered by a built-in rechargeable battery, no external power supply is required. Its compact footprint and sturdy metal casing is built to meet the most stringent environments faced by working professional musicians.

AIRSTEP has comprehensive and powerful MIDI control functions. It has 2 5-PIN MIDI output interfaces, 1 Bluetooth MIDI interface and 1 USB MIDI interface. Together, they can control all the MIDI-related devices and effects apps at the same time. AIRSTEP can be placed on a pedalboard, next to a synthesizer stand, or under computer desk, and can easily be carried with a mobile phone or tablet.


AIRSTEP can send all types of MIDI messages, Control Change, Program Change, Note On/Off, SysEx, Real Time, etc. You can send up to 8 different MIDI messages at a time when you press each switch, which means that each switch can control up to 8 different MIDI devices, all at the same time. All the required MIDI messages can be easily edited through the AIRSTEP APP, and stored as presets. You can edit and store countless presets in the companion APP, and load AIRSTEP with one click whenever you want. There are a large number of factory presets already in the APP, which can meet the control needs of most of your gear.


AIRSTEP also has a powerful MIDI forwarding function. It has a traditional MIDI input interface, Bluetooth and USB can also be used as MIDI input. All MIDI input messages can be forwarded to any MIDI output interface, which means connecting your traditional MIDI keyboard or controller to AIRSTEP, they immediately become a wireless MIDI device, AIRSTEP can also forward a MIDI message sent from your computer or mobile phone to your hardware effector to switch presets.


Computer keyboard on the ground

AIRSTEP can send HID messages via Bluetooth. HID messages are actually messages sent by a computer keyboard, so you can use AIRSTEP as a wireless keyboard placed on the ground. You can map any key value on the keyboard to the AIRSTEP's footswitches. Pressing the footswitch your foot is equivalent to pressing the key on the keyboard. When you are playing guitar while watching video lessons, practicing, covering, or recording, you always need to stop playing and use your hands to control the pause, playback, fast forward, rewind, or page turning of the music. Now, all of these can be controlled with your feet, and you can finally concentrate on your performance!

All the key values on the computer keyboard can be mapped to any step on the AIRSTEP through the APP. As with MIDI messages, up to 8 different HID messages can be sent by one footswitch.

AIRSTEP can be used as traditional relay footswitches to control amps or stompboxes with traditional relay footswitch interface. As long as your device can be connected to an ordinary foot switch, it can be connected to 4 RELAY interfaces of AIRSTEP to achieve the functions of amp channel switching, toggle effects, tap tempo, and even can be used as the sustain pedal of keyboard instruments. Similarly, you can use the mobile phone APP to edit RELAY control parameters for footswitches.

AIRSTEP has 5 footswitches, each footswitch can send up to 8 different messages to the specified output interfaces at a time, and the output message type can be any combination of MIDI, HID, and RELAY messages. AIRSTEP has three trigger modes: press, long press, and release. Each trigger mode can be assigned different message outputs to achieve the most flexible control. You can short press the footswitch to toggle effects, long press the same footswitch to switch presets, or you can press to open and hold on boost until the pedal is released. Footswitches can also be set to toggle mode. In the same trigger mode, the first trigger and the second trigger can send different messages. All these functions can be easily edited and stored through the mobile APP.


APP Editing
All the parameters may be edited using AIRSTEP APP. There is no editing method that is more intuitive and convenient than the mobile APP! AIRSTEP APP connects to AIRSTEP via Bluetooth and displays its working status in real time. All parameters are stored in presets. The APP can store a limitless number presets as you want and you can load them into AIRSTEP with only one click. AIRSTEP can store the 5 most commonly used presets locally, and can also be used when no APP is connected. The AIRSTEP APP supports iOS/Android and may be downloaded from the Apple App Store or XSONIC official website. (To explore this free APP in advance, you can search “AIRSTEP”in App Store or Google Play)


USB HOST
USB HOST is a unique feature of AIRSTEP. It is equivalent to the USB interface on the computer. Devices that can be connected to the computer USB around you can also be connected to AIRSTEP. For example, AIRSTEP can connect and control multi-effect processor such as ZOOM MS Series with only the USB interface, or you can connect a USB MIDI keyboard to directly supply power to it, and upgrade it to a wireless Bluetooth MIDI Keyboard through AIRSTEP's powerful MIDI forwarding function.

AIRSTEP Lite
AIRSTEP Lite is a simplified version of AIRSTEP, with only wireless functionality. No USB and traditional MIDI interface, no RELAY interface, and no expression pedal interface. Other than that, all other functions and applications are exactly the same as AIRSTEP. AIRSTEP Lite is mainly suggested for wireless control, connecting a computer, tablet or a mobile phone to send Bluetooth MIDI and HID messages. When you only need to control a computer or a mobile phone, you can consider choosing AIRSTEP Lite.
But more importantly, Lite can not only be used independently but can also be used as an AIRSTEP’s wireless extension footswitches. It can wirelessly control all wired devices connected to AIRSTEP!
Last edited: Jul 21, 2020
A

adamquek said:
OMG. I do not need this.... but I think I am going to end up with one
Click to expand...

I think its worth... having it

i already have the Xtone Pro, but the airstep would be perfect to have on the floor under my studio desk, to control daw and computer and stuff.

I sent them a mail just now.

Looking at prices for the 6 button audio interface...my original assumption that this thing was likely to cost $100/switch might be off. More interested.
G

I'm not very familiar with midi so maybe someone more familiar could provide some insight. Would this work with the HX stomp to add an up/down for presets on two switches and then add 3 effects on the remaining three switches to toggle on/off and then have the 3 built in switches on the stomp for 3 snapshots? If it's capable of this (or more so if the stomp is capable), as well as controlling my DSL40CR to be able to access the 2 modes of both channels, I may need to seriously look into this if the price is right.

Guitarzan00 said:
I'm not very familiar with midi so maybe someone more familiar could provide some insight. Would this work with the HX stomp to add an up/down for presets on two switches and then add 3 effects on the remaining three switches to toggle on/off and then have the 3 built in switches on the stomp for 3 snapshots? If it's capable of this (or more so if the stomp is capable), as well as controlling my DSL40CR to be able to access the 2 modes of both channels, I may need to seriously look into this if the price is right.
Click to expand...

Yeah, it would be able to do that no sweat.

Any idea of release date or price? I can’t find anything.
S

Hi Guys, Andy from Diffusion Audio here, we'll have pricing and availability information up here very soon. I will also be able to assist with any questions about how the unit works and some specialized applications. The companion app "AIRSTEP" is available on the IOS app store for anyone wanting a sneak peak at how deep this unit can get and see also some of the devices and typical setups that are already in the preset menus. We will also be working on some videos addressing various setups in action.

not sure I understand, what are looking to do with an analog input, please clarify.

sysexguy said:
not sure I understand, what are looking to do with an analog input, please clarify.
Click to expand...

Link an expression pedal to one or more MIDI targets.

vtgearhead said:
Link an expression pedal to one or more MIDI targets.
Click to expand...

Wait wait whaaat... i think i missed this... they did not put an expression input into this thing???

thats like one of the top features of the Xtone Pro, one expression, use it for three different things.
S

Airstep has 2 expression inputs that each are assignable to up to 8 targets and each one to specified outputs on a per patch basis. Airstep Lite doesn't not have these inputs
S 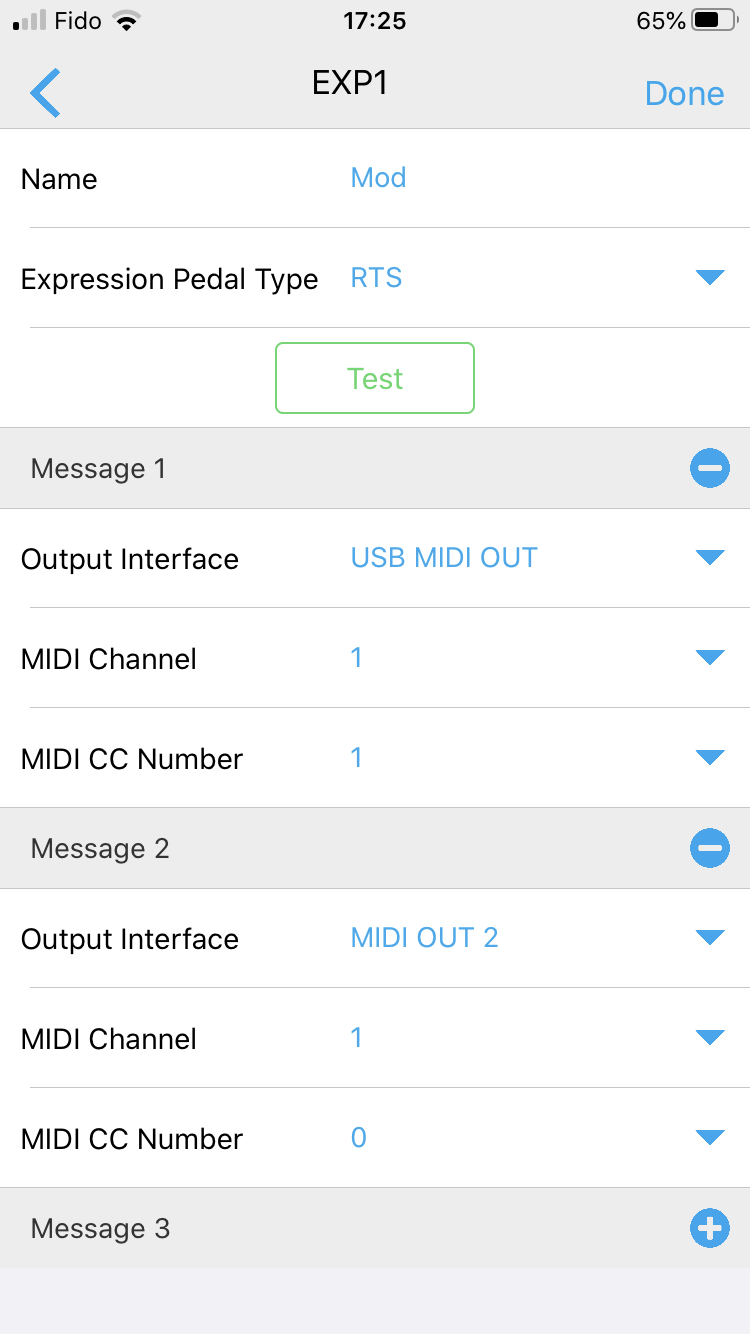 Here's the edit screen in the Airstep APP
S

Airstep has 2 expression pedal inputs that can be assigned to whatever midi controller # you want and then used in realtime. This assignment is per bank or if you want them to be global, just use the same assignment for all the banks. The footswitches can be assigned to just about anything so they can do solo boosts, leslie slow/fast or tap tempo as examples.
You must log in or register to reply here.
Share:
Facebook Twitter Reddit Pinterest Tumblr WhatsApp Email Link